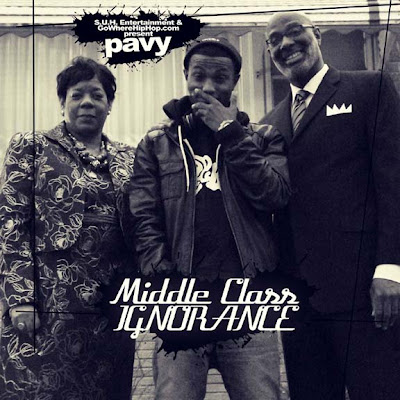 S.U.H. Entertainment and Gowherehiphop.com proudly present Middle Class Ignorance, the new album from Chicago emcee Pavy (Progressive Ambitious Vigorous Youngin’). The album’s first single is the Dutch Cannon-produced “Triumphant” (watch video here). The album features appearances from Capital K, Vic Spencer, The Boy Illinois, D2G, JDP, Ashley Laschelle and Ca$hflow Ellis. “This project was crafted over a period of two years,” explains Pavy. “I was 18 when I started and when I finished I was what I am now, 20. So the idea of Middle Class Ignorance has changed as my mindframe has also changed. I feel ignorance – or the sense of obliviousness – is very important in life, because if I logically looked at the odds I would never attempt to succeed in music. I feel like this is the beginning of life for me and hopefully you guys like the music enough to tag along for the ride.”