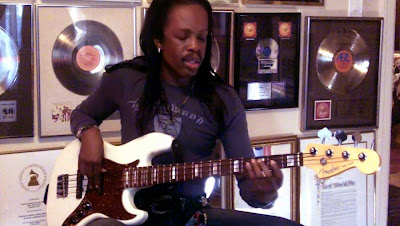 “The Star Spangled Banner” is just a song played at ball games. America’s real national anthem, the song that puts us all in the same place the second those transcendent opening notes rain down, is “September”, the 1978 smash by Earth Wind & Fire, the celebrated, Grammy-laden R&B band with residencies on Hollywood’s Walk of Fame, in the Rock ‘N Roll Hall of Fame and the hearts of millions as well as their native Chicago. EWF frontman based the bandname on his zodiac sign of Sagittarius, which has a primary elemental quality of Fire and seasonal qualities of Earth and Air. But it’s common knowledge from the second the band takes the stage that the lion’s share of the fire is supplied by Maurice’s little brother, bassist extraordinaire and force of nature Verdine White.

Verdine still remembers the first time he saw a bass guitar. “The instrument was standing alone in the corner of the orchestra class… tall, mysterious and majestic, so different from the others, it called me and the love affair began.” Not five years later his brother Maurice called him out to Los Angeles to come join EWF. Verdine never looked back. Today, Verdine’s technical yet soulful playing embodies the EWF aesthetic, and he is the most energetic element of a finely tuned music machine that has performed hits like “Shining Star”, “Serpentine Fire” and “Fantasy” for presidents, kings and sultans, as well as adoring crowds on every continent.