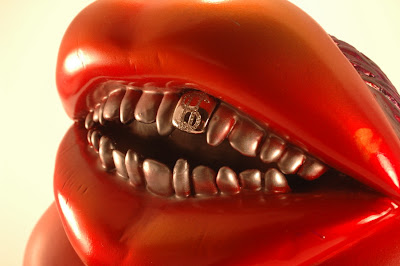 They have names like Lip Vagina Monster and Jumping Brain. They’re made by international artists, Hollywood filmmakers and millionaire executives with creative itches. They sell for thousands of dollars each, and go on to become worth many times more. And they’re toys. High-end, one-of-a-kind toys are the newest offshoot of the ‘low-brow’ art movement – riffs on underground, street and pop culture – born in 1970s Los Angeles. So it makes sense that Hollywood boasts the world’s first Toy Art Gallery, which will host the Red Carpet Kaiju Show on September 4th, featuring works from the likes of Akoart, Alimana, and Emilio Garcia, respected artists who will travel from Japan, Spain and Mexico to attend.

Prolific toy art collectors include Nike CEO Mark Parker, celebrated artist Mark Nagata, and TAG founder Gino Joukar, who opened the gallery not one year ago to share his passion with the world. Toy art is inspired by everything from old Japanese cartoons to music to politics. They’re a diverse bunch, comprising insiders from companies like Pixar and Upper Playground, to Radiohead cover designer Jermaine Rogers, to Carlos Enriquez Gonzalez, the Venezuelan artist whose customers include Jeff Koons, creator of the most expensive piece by a living artist ever auctioned ($25.7 million). As TAG expands into the production as well as the showcasing of toy art, Joukar has partnered with Gonzalez to bring his interpretations of the “collective unconscious” to the world. But where mos t toy art is made simply of vinyl or fiberglass, TAGTOYS use gold and diamonds to multiply their worth as well as their significance. “The antiques cultures uses the gold, precious metals and diamonds to represent their gods, not only because they were hard to find, but because they were symbols of the divinity,” Gonzalez explains.”

Toy Art Gallery is proud to present its newest group show, Red Carpet Kaiju. TAG will debut Gonzalez’ controversial “Hierophany” toy, and has invited some of the best monster and kaiju-inspired artists from around the world to showcase their unique visions and talents within this strange and wonderful sub-genre of art toys. Their work spans from production toys and hand-painted customs to unique sculptures made from a variety of mediums. Joukar and Gonzalez will also be debuting TAGTOYS with sneak previews of new figures made in luscious Japanese soft vinyl. Opening reception is September 4th from 7-11 PM, with artists in attendance, music, drinks, a food truck, giveaways and more.