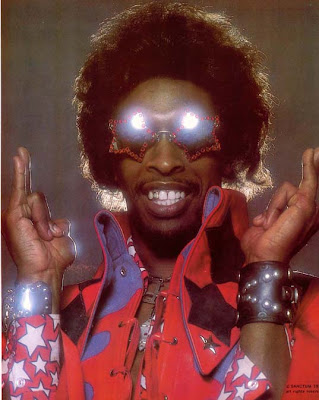 BOOTSY COLLINS, the starry-eyed funkateer who literally put the bass in contemporary music by way of his legendary releases with James Brown, Parliament/Funkadelic and Bootsy’s Rubber Band, has announced the crossing of another milestone in his storied career: the release of the first Bootzilla fine art collection. On December 1, 2010, Collins will unveil the result of a lengthy process involving photography, greenscreen, found images and archived elements, undertaken with the aim of isolating and visually replicating what’s going on in his imagination.

Every piece in this limited-edition line of 300 will be a one-of-a-kind collectible, each bearing a unique funk mantra created and applied to the canvas by Bootsy himself. He will also number and sign each piece, and add his handprints in acrylic paint. Each piece will feature a number of hidden elements for its owner to discover. 250 of the 300 will measure 40″ x 30″, while the remaining 50 will weigh in at a whopping 80″ x 60″. The first 1,500 people to sign up for more information at bootsycollinsart.com will receive a ‘golden ticket’ which will allow them to preview the piece on November 29th, two days before its official public unveiling.