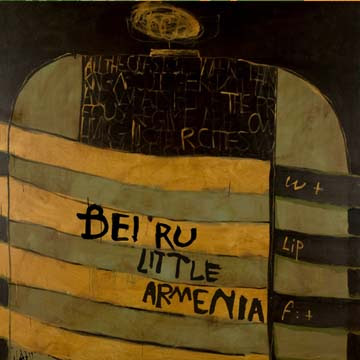 Sampling is archeology. Digging through crates for obscure old records and drafting the sounds of times past into contemporary music is as much about preserving the past as digging for bones is. Few producers take that pursuit as literally as LA native and Armenian beathead Bei Ru, who has traveled across Armenia, Lebanon and Syria on a mission to hunt and rescue rare, out-of-print Armenian 12″s and 45″s from oblivion. He breathes new life into the sounds on those records on Little Armenia (L.A.), an intoxicating voyage through rhythm and melody that serves not only as a dedication to the under-appreciated Armenian musicians of yesteryear and a homage to the Little Armenia section neighborhood of Los Angeles, but also as a musical map of the Armenian diaspora and a wake-up call to his people to take pride in their rich musical history.

Electric instruments and modern sounds began creeping into traditional Armenian music between the 1950s and the 1980s, the era Little Armenia focuses on. These are the songs Bei Ru grew up on, songs he says most Armenians have forgotten. “What inspired me to make this project was all the incredible music I’d find on these old records that most people – even most Armenians – are unaware of,” he says. Bei Ru’s inspiration to take Armenia’s musical past into its future manifests itself in everything from the album’s sound to its name. “You walk down a street in the Little Armenia section of Los Angeles, and it’s as if the people brought their home country with them. These people, who keep themselves so surrounded by their culture, have forgotten how important the role of music is. Contemporary Armenian music is virtually devoid of any of the aspects of what made those old records so awesome. I felt that Armenians and non-Armenians alike should be exposed to this lost era of music that no one seems to remember.” Little Armenia drops November 19th on Musa-Ler Music.