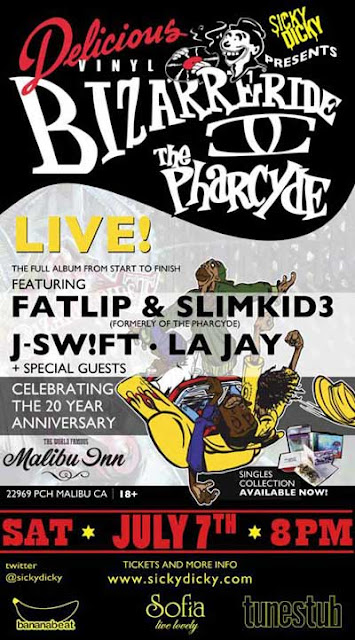 To celebrate the 20th anniversary of the release of The Pharcyde‘s classic debut album Bizarre Ride II The Pharcyde, Delicious Vinyl is releasing a 3-CD deluxe edition on July 10 (more info). Fatlip, Slimkid3, Bizarre Ride producerJ-Sw!ft and LA Jay have also teamed up with DV to bring the Bizarre Ride experience to the stage, and will be performing the entire album live this Saturday, July 7 at Malibu Inn.

On Tuesday July 10, Fatlip and Slimkid will be ringing in the deluxe edition’s release with an in-store DJ set and album signing at Amoeba Records in Hollywood.