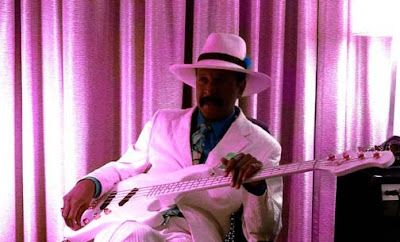 You may not know the song names. You may not know who made them. But you sure know the songs. Which is to say, you know the bass. Not that everything about the song isn’t phenomenal, because everything is. But the bass is the main course. It’s in your face, it’s all over the place. Just like your favorite singer’s voice, you know there has to be only one person who can make that sound. That person is Larry Graham: producer, singer, songwriter and inventor of ‘slapping’, the technique of aggressively slapping and plucking bass strings with your fingers to create a sound that lends almost as much to a song’s percussive end as its low end. Today the style is so commonplace it’s hard to imagine a time when it was unheard of, but Graham pioneered it. And on July 1, he will teach this technique and much more as part of a similarly pioneering institution known as the Funk University, an online bass guitar academy curated by the one and only Bootsy Collins.

Odds are, the song you’re listening to is “Thank You (Falettinme Be Mice Elf Agin)” by Sly & The Family Stone, the band Graham changed music with. Or maybe it’s “Sing A Simple Song” or “Dance To The Music” or any of the hits they cranked out in their late-’60s heyday, all of which revolve around Texan-born Graham’s fearless, peerless basswork. In 1973 Graham started his own band, Graham Central Station, whose biggest hit was 1975’s “Your Love”. A constant collaborator and friend of Prince, today you can find Graham jetting around the world with The Purple One, handling bass on his Funk Around The World Tour. Graham also happens to be rapper Drake‘s uncle.