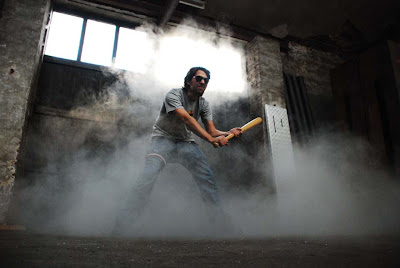 “First You Love It” video
SpeedDial7.com

Emcee/producer/road warrior Tom de Geeter is the tireless engine behind the one-man band known as Speed Dial 7. You may know De Geeter as one half of Zucchini Drive, one third of Cavemen Speak, one fourth of Nuccini, and one fifth of Gunporn. Originally from Kortrijk, Belgium, De Geeter has evolved from hardcore-kid to alternative rap teenager to mental-patient adult and beyond. His sound has been influenced by his world travels with Zucchini Drive, and by learning the ways of the sword. De Geeter puts his vocals on whatever he thinks will work, from sample-based foundations to original melodies. While touring for his October release Short Rich Apocalypse, De Geeter drew inspiration from the places he played, artists he met, and floors he slept on to cook up the spontaneous and energetic 11, threaded togethe r with a spread of driving rhythm, eerie melodies, and dark humor. Guests include Mike Ladd, Pip Skid, Passage, Nomad and Elissa P.