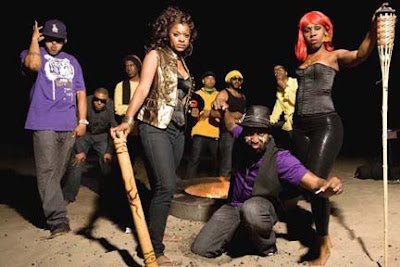 listen/download
Milky Way EPK
Milky Way on OkayPlayer
The Milky Way on Facebook
THE MILKY WAY. A vast entity in which traces of everything that ever was, is, or will be, can be found. A collection of stars, each shining alone, all inexorably drawn together. An LA-based nine-piece band of beatsmiths, DJs, musicians and performers which has inspired comparisons to Parliament, Outkast and Radiohead in the same breath.

MC, songsmith and Milky Way frontman Sum formed the band in 2008. But music’s magnetic pull started bringing the members of this tri-coastal clan together years ago – first in spirit, then in person, one by one, to the Edge Of The World a.k.a. Los Angeles, California, the perfect point from which their post-millennial strain of funk, electronica and live hip-hop that doesn’t suck can rain over the cosmos and reverberate through the universe. A family affair, the MW lineup comprises college buddies, play cousins, childhood friends and even a married couple. X-Man (MPC), P.U.D.G.E. (bass & keys), Computer Jay (keys) and X-Ro (synth) are all formidable DJs and beatsmiths with their own followings. Later, Taurus Hamilton (guitar) and DJ Cee Brown (turntables) were added to fill the sound out. Vocabutrois & Lil Mis (background vocals/theatrics) were brought in to give a different twist on adlibs and stage performance, and The Milky Way was complete. Since inception, “The Milky Wayans” have performed with the likes of Dwele, Arrested Development and The Pharcydeat some of Los Angeles’ most historic and well-reputed venues.