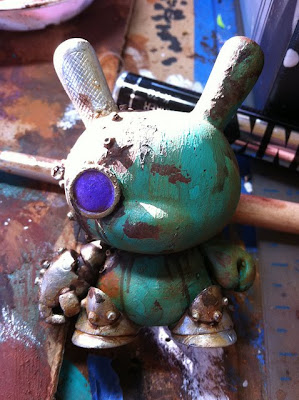 “I love rust, decay, history, ruins, military, skulls, vintage,” says toy artist DrilOne of his lifelong obsession. “And all this makes me who I am.” This new landscape of concrete and steel has birthed a new generation of artists for whom wear and tear are revered as the new nature, the only real part of an increasingly synthetic world. On Saturday December 11th, the Toy Art Gallery proudly hosts the opening night of Metallic Machinations, a group show where DrilOne and fellow grime addicts Cris Rose, Phu, Jester and Rohby will showcase a mix of custom designer toys and original creations, each one a portrait of the juncture between machine and man, intelligence and time, destruction and creation.

Every artist in Machinations is an established custom artist in their own right, who tell distinct but not dissimilar tales of their love affair with grit. Growing up in New York City’s public school system gave DrilOne a lifelong taste and eye for the “chaos and creativity” that he puts into each of his one-of-a-kind figures. UK-based Cris Rose’s self-professed fanaticism of all things mechanical drove him to his all-consuming pursuit of the creation of “retro-styled robots with conservation on their mind and rust on their chests”. The concept of recycling informs every piece bearing the name Phu, pieces that can be found in shows and exhibitions worldwide. A voracious appetite for punk rock and nine years in the US Army imbues every piece that passes through Jester’s hands with the whiff of urban aggression. Anaheim, CA-based Rohby’s countless hours spent watching the 1980s cartoon Robotech as a child led him to a worldwide reputation as one of the toy scene’s foremost ‘mech’ artists.
“Machinations” is the seventh exhibit from TAG, the world’s first gallery devoted to fine art toys. Founded and operated by collector and enthusiast Gino Joukar, TAG’s last show was French artist Tan-Ki’s November 9 solo show, When Birds Sing The Song Of The Clouds. TAG’s Jouwe Custom Show featured artists like Cameron Tiede, Jimmy Pickering and David Lanham, while September 4th’s Red Carpet Kaiju show featured monster and kaiju works from Blobpus, Carlos Enriquez Gonzalez and Emilio Garcia.
“Metallic Machinations”’ opening reception is December 11th 2010 from 7-11 PM, with a live DJ and complimentary drinks. To learn more about this Saturday’s featured artists, check the links below.