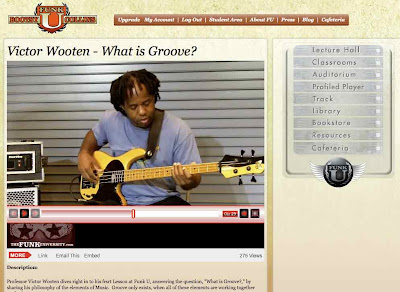 The most accomplished jazz bassist of his generation. Five-time Grammy recipient. Bass Player Magazine’s Bass Player Of The Year – three times in a row, making him the first person to win more than once. Producer. Lecturer. Author. And now, guest professor at The Funk University (thefunkuniversity.com), the groundbreaking online bass guitar school helmed by funk legend Bootsy Collins of Parliament/Funkadelic, James Brown and solo fame who has assembled the most comprehensive lineup of top-tier bassists the world has ever seen for his students. Exclusive video of Wooten sharing the exercises, techniques, advice, and philosophy that made him a bass giant are now available for viewing by enrolled F.U. students, alo ng with similar tutorials from the likes of Les Claypool, Meshell Ndegeocello, John B. Williams, Divinity Roxx, Dennis Chambers, Norwood Fisher, Thee Ram Jam, Frankie “Kash” Waddy, Bakithi Kumalo, P-Nut, Blackbyrd McKnight, and Billy Bass – not to mention Bootsy Collins himself – all for a monthly fee equal to the average cost of one in-person bass lesson.

‘Jazz bassist’ is a pedigree few today can claim with authority, a half-century after what many consider the genre’s heyday. The fact that Victor Wooten can do so at the age of 45 speaks to his dizzying level of devotion to the craft, and the stellar reputation it has garnered him worldwide by music lovers and peers alike as a pillar of jazz bass. Yet it’s almost a misnomer to speak only of jazz in reference to Wooten, who can rock a fiddle as easily as he can his signature Fodera electric bass, and regularly delves into bluegrass, rock and funk. He is bassist for Bela Fleck & The Flecktones, and has worked in the studio and onstage with talents from Stanley Clarke and Branford Marsalis to Prince and Dave Matthews.

TheFunkUniversity.com is a ‘virtual campus’ where exclusive new content is added daily, geared towards intermediate to advanced bass players as well as anyone interested in a deeper understanding of funk. Each guest synthesizes their decades of invaluable experience into a series of discussions, lessons and exercises on bass and rhythm all within the classrooms section of the site. In Bootsy’s Lecture Hall, Bootsy provides extensive lectures on funk, the bass, and his library of genre-defining work. The library at Funk U houses a wealth of multimedia learning content, from video and audio to gear tutorials. Staff reviews of students’ performance will be conducted periodically, and professors periodically answer students’ questions. Bootsy’s Funk University is produced by SceneFour, the notorious L.A . creativity house responsible for projects with Al Gore’s Current TV, MTV-U, Nine Inch Nails, the RZA, Fishbone, Public Enemy, Helmet, Marilyn Manson, The Pixies, and Beck. Interested players are encouraged to sign up for exclusive information at thefunkuniversity.com.